Atomic number and mass number are always whole numbers because they are obtained by counting whole objects (protons, neutrons, and electrons). The sum of the mass number and the atomic number for an atom (A-Z) corresponds to the total number of subatomic particles present in the atom. The mass number reports the mass of the atom’s nucleus in atomic mass units (amu).

Let’s look at the difference between the two terms.

What is Atomic Number?

What is Mass Number?

Difference between Valency, A and Z:

When we want to find out the valency, we look at electrons only in the outermost shell of the atom. But when we want to know the atomic number or the mass number, we look at the total number of protons and neutrons. 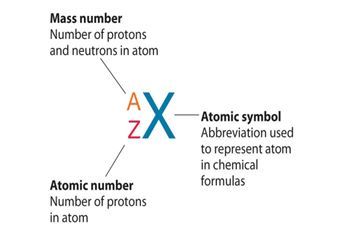 So, the notation of Carbon is:

An atom has an atomic number of 9 and a mass number of 19.

3. Why the atomic number is denoted by Z?
Ans: The atomic number symbol, Z, stands for “Zahl,” meaning German number. The symbol Z denoted an element’s place in the periodic table before 1915.

4. What is the mass number?
Ans: The complete amount in the protons and neutrons in the nucleus of an atom. For example, nitrogen has seven protons in its nucleus and seven neutrons, supplying it with 14 masses.

To know more about the number of protons, neutrons and isotopes, download Byju’s- The Learning App.