Karnataka Secondary Education Examination Board is commonly called as KSEEB is the main education board in Karnataka. Karnataka board was established in the year 1964 and is responsible for conducting SSLC exams, PUC exams, and other state-level exams. The details that would be covered about Karnataka education board here includes the following:

About KSEEB: An Overview

KSEEB is the acronym for Karnataka Secondary Education Examination Board. It was established in 1964 and is responsible for promoting quality education to the students of Karnataka.

Functions Of KSEEB: Karnataka Examination Board

The various roles that the KSEEB(Karnataka Examination Board) overlooks include:

To make the functioning of the board more efficient, the Karnataka board is divided into divisional offices with its headquarter in Bengaluru (Bangalore). The KSEEB mainly overlooks two examinations which include:

An overview of these two exams is discussed below. Apart from these two exams, the Karnataka examination board also conducts supplementary exams every year.

The SSLC stands for Secondary School Leaving Certificate. This certification is offered to those students who clear the secondary schooling level exam i.e. class 10 exam. Every year almost 8-9 lakh students appear for the KSEEB SSLC exam which is generally conducted in the month of April. An overview of the KSEEB SSLC exam is given in the following charts. 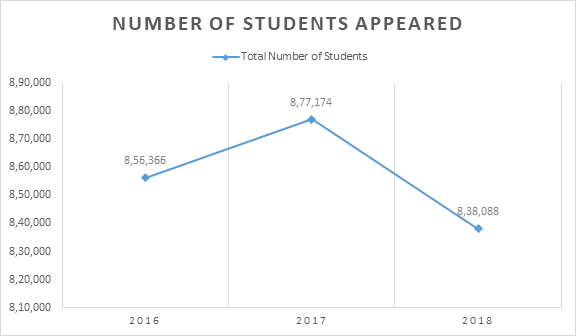 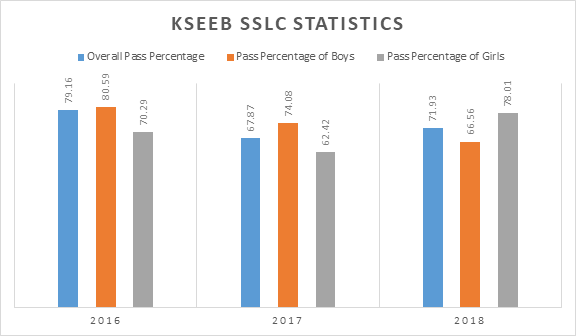 The PUC or the Pre-University Course refers to class 11 and class 12. Class 11 is called the 1st PUC and the class 12 board exams are called 2nd PUC. The Karnataka state PUC board exam for class 12 is conducted every year in the month of March. The overview of Karnataka PUC-II exam is given in the charts given below. It should be noted that total students number in 2016 is an approximation. 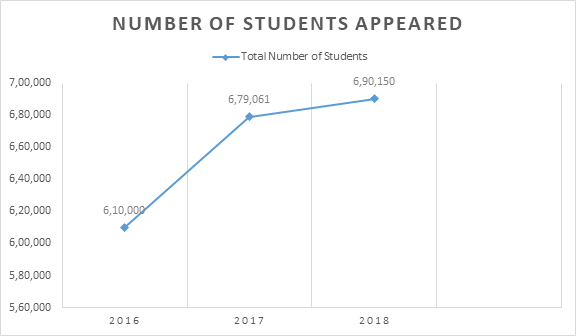 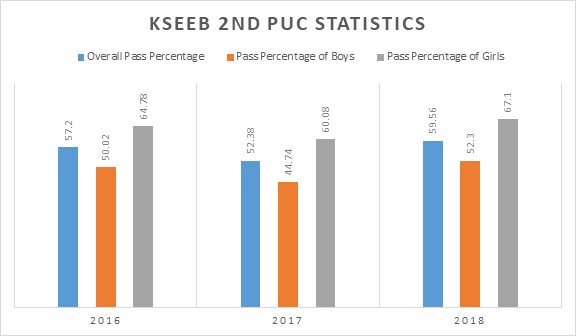 Both the syllabus of KSEEB SSLC and KSEEB PUC is decided by the Karnataka board after thorough research and brain mapping the contents. The syllabus is designed in a way to help students get acquainted with all the important topics from all the subjects. Check out the complete KSEEB syllabus for all the classes from here.

Karnataka State Board Syllabus for Class 6 -12

Each of the papers in KSEEB exams carries 100 marks which students need to complete in 3 hours. Students are also given 15 minutes to go through the questions and instructions. The paper consists of MCQs and descriptive questions. Check the detailed exam pattern of SSLC and PUC exams from the following links:

The Karnataka Secondary Education Examination Board is responsible for not only devising the syllabus but also making the books. The books are designed by keeping the requirements of respective classes in mind and the topics are introduced in an easy to understand way. The KSEEB textbooks are available online and are provided for different mediums and in different languages which include English medium, Kannada medium, Hindi medium, etc.

Karnataka board releases the time-table of each of the exams i.e. SSLC, and PUC exams every year. Generally, the SSLC exam starts by last week of March and end by the first week of April. On the other hand, the PUC 2nd exams are conducted throughout March. The KSEEB also conducts supplementary exams for the students who fail to clear the board exams. The Karnataka board timetable for both the exams are provided in the following articles:

The results for both class 10 and class 12 are released by the KSEEB on the official website. The results are generally released in the month of July. The results can be checked from the official result website of Karnataka education board i.e. “karresults.nic.in”. In this website, the results of all the exams, including SSLC, PUC, and supplementary exams are available and can be downloaded.

Find below the table where links for KSEEB study materials are made available:

Frequently Asked Questions on Karnataka Board

What is the full form of KSEEB?

KSEEB is the acronym for the Karnataka Secondary Education Examination Board, which came into existence in the year 1966

What is the Karnataka Secondary Education Examination Board?

Karnataka Secondary Education Examination Board that came into origin in the year 1964 is responsible for conducting SSLC and other examinations. The board also regulates and supervises the system of Secondary education in Karnataka State. The board is in charge of various activities that include devising the courses of study, prescribing syllabus, conducting examinations, granting recognition to schools and, providing direction, support and leadership for all secondary educational institutions under its jurisdiction.

What is the board of SSLC?

Commonly referred to as ‘class 10 board examinations’ in India, the SSLC is the short form for Secondary School Leaving Certificate and is often given on passing the grade 10 public exams. SSLC is also a common eligibility examination popular in many Indian states, especially Karnataka, Kerala and Tamil Nadu. You can get more details about Karnataka Board SSLC here.

What is PUC in Karnataka?

PUC is the abbreviation of the pre-university or pre-degree course also known as the intermediate course ( which is known as plus two). The course is of two year’s duration and is conducted by Indian state education institutions or boards. If a person wishes to get admission into an Indian university, they have to pass the PUC, which is why it is also considered as a degree bridge course to prepare students for university education. Students are allowed admission to this course based on the marks they have obtained for their SSLC or Class 10. Hence, before joining for graduation any Indian student is expected to have successfully completed five years of primary school, followed by five years of secondary school and two years of PUC. Karnataka State conducts examinations at the end of the second year of the PUC for university admissions. Recently, the First PUC exams have also been made public.

What are the Criteria for Passing Karnataka Board PUC?

Students need to secure 35% marks to clear the PUC exam. Candidates will need to score a minimum of 70 marks in the language papers and 30 marks each in individual subjects for a total of 210 out of 600 marks to be declared pass.

What is the new SSLC Exam Fee?

The Karnataka secondary education examination board has revised the SSLC fee this year from Rs 365 to Rs 440. At the same time, the fee for failed candidates reappearing for the exams have also been hiked from Rs 240 to Rs 290 for one subject, Rs 290 to Rs 350 for two subjects and Rs 390 to Rs 470 for 3 or more subjects. However, the fee for laminating the marks card remain the same Rs 20.

I have passed my Karnataka Board 2nd PUC, but I am not happy with my marks.Is it possible for me to repeat another year?

Most boards have provisions for improvement exam. If you think that you can score well and deserve more marks than you have been awarded, then definitely you should give it a try. Also, if you have failed in any subject you can plan to do the improvement or supplementary exams.

When was the Karnataka Board 2nd PUC Supplementary Exam in 2019?

Karnataka Secondary Education Examination Board (KSEEB) released the Karnataka 2nd PUC Supplementary Time Table 2019 on April 15, 2019. Moreover, the candidates can download the time table from the official website- pue.kar.nic.in. The Karnataka board supplementary examination was conducted from June 07, 2019.

When is the SSLC Supplementary Results 2019 due?