Polynomials are as expressions which are composed of two algebraic terms. In this lesson, all the concepts of polynomials like its definition, terms and degree, types, functions, formulas and solution are covered along with solved example problems. Below is the list of topics covered in this lesson.

What is a Polynomial?

A polynomial is defined as an expression which contains two or more algebraic terms. It is made up of two terms namely Poly (meaning “many”) and Nominal (meaning “terms.”). Polynomials are composed of: 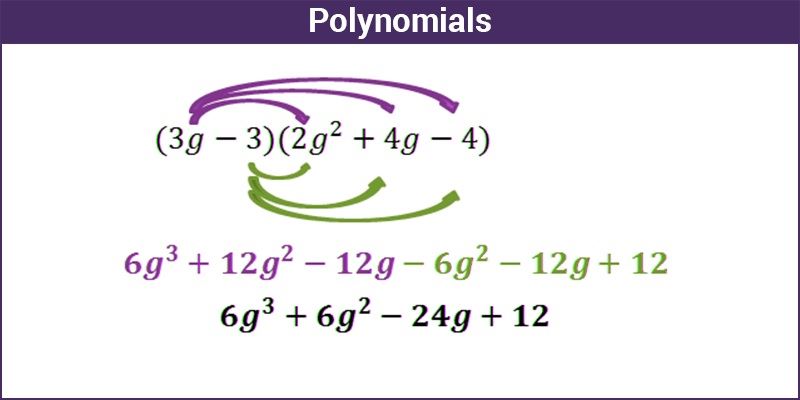 Degree of a Polynomial

The degree of the polynomial is 4.

Polynomials are of 3 different types and are classified based on the number of terms in it. The three types of polynomials are:

These polynomials can be combined using addition, subtraction, multiplication, and division but is never division by a variable. A few examples of Non Polynomials are: 1/x+2, x-3

A monomial is an expression which contains only one term. For an expression to be a monomial, the single term should be a non-zero term. A few examples of monomials are:

A binomial is a polynomial expression which contains exactly two terms. A binomial can be considered as a sum or difference between two or more monomials. A few examples of binomials are:

A trinomial is an expression which is composed of exactly three terms. A few examples of trinomial expressions are:

A polynomial P(x) divided by Q(x) results in R(x) with zero remainders if and only if Q(x) is a factor of P(x).

The addition, subtraction and multiplication of polynomials P and Q result in a polynomial where,

The number of positive real zeroes in a polynomial function P(x) is the same or less than by an even number as the number of changes in the sign of the coefficients. So, if there are “K” sign changes, the number of roots will be “k” or “(k – a)”, where “a” is some even number.

Every non-constant single-variable polynomial with complex coefficients has at least one complex root.

A polynomial function is an expression constructed with one or more terms of variables with constant exponents. If there are real numbers denoted by a, then function with one variable and of degree n can be written as:

Any polynomial can be easily solved using basic algebra and factorization concepts. To solve a polynomial equation, the first step is to set the right-hand side as 0. The explanation of a polynomial solution are explained for two types:

First, make the equation as 0. So,

First, arrange the polynomial in the ascending order of degree and equate to zero.

There are four main polynomial operations which are:

Each of the operations on polynomials are explained below using solved examples.

To add polynomials, always add the like terms i.e. the terms having the same variable and power. The addition of polynomials always results in a polynomial of the same degree. For example,

Subtracting polynomials is similar to addition, the only difference being the type of operation. So, subtract the like terms to obtain the solution. It should be noted that subtraction of polynomials also result in a polynomial of the same degree.

Two or more polynomial when multiplied always result in a polynomial of higher degree (unless one of them is a constant polynomial). An example of multiplying polynomials is given below:

Division of two polynomial may or may not result in a polynomial. Let us study below the division of polynomials in details. To divide polynomials, follow the given steps:

If a polynomial has more than one term, we use long division method for the same. Following are the steps for it.

Hence, addition result in a polynomial.

Hence addition result in a polynomial.

This cannot be simplified. Therefore division of these polynomial do not result in a Polynomial.

Keep visiting BYJU’S to get more such math lessons on different topics. Also, register now to access numerous video lessons for different math concepts to learn in a more effective and engaging way.

Test your Knowledge on Polynomial
Q5