Furthermore, we also update content as prescribed by CBSE. And moreover, solutions are drafted in a way that prioritizes ease-of-learning. 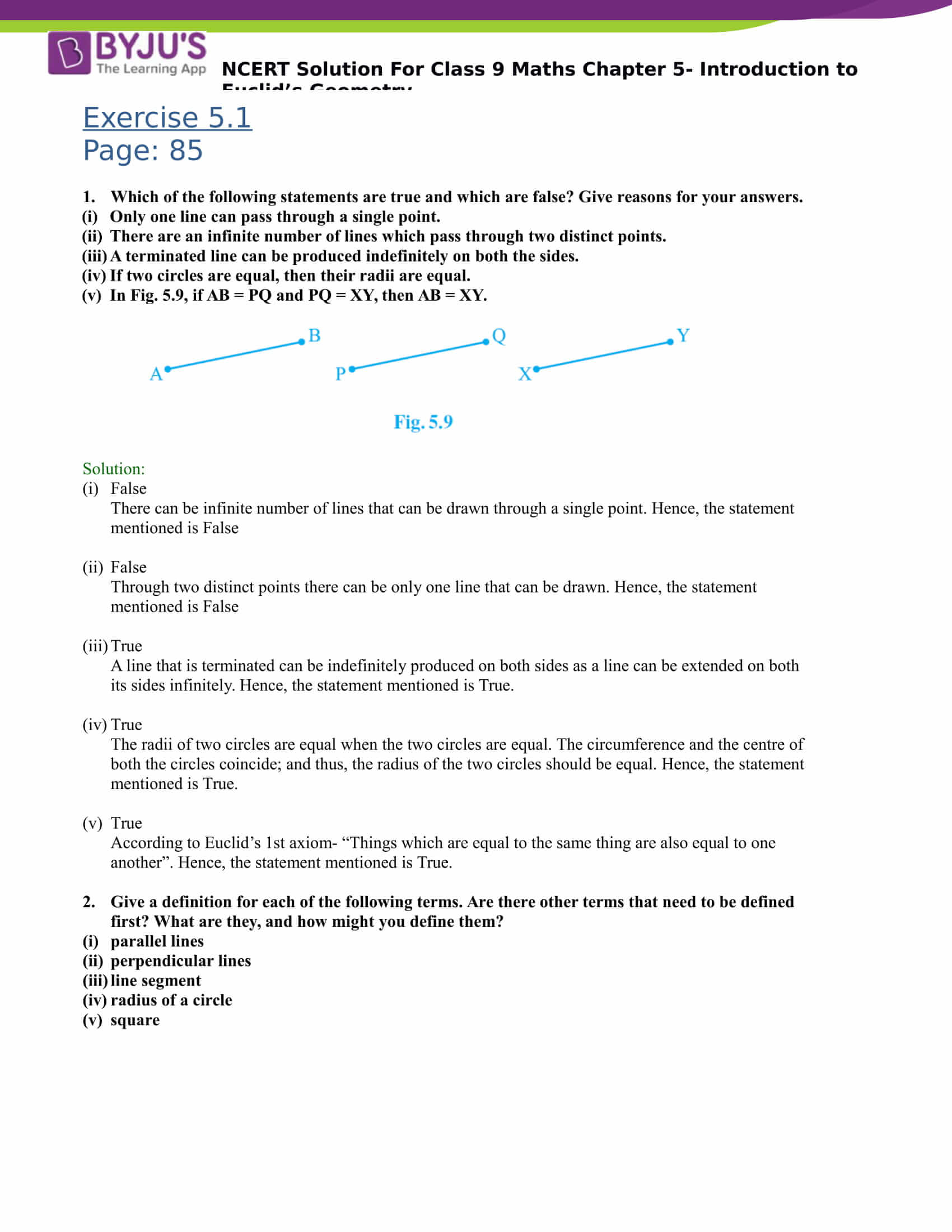 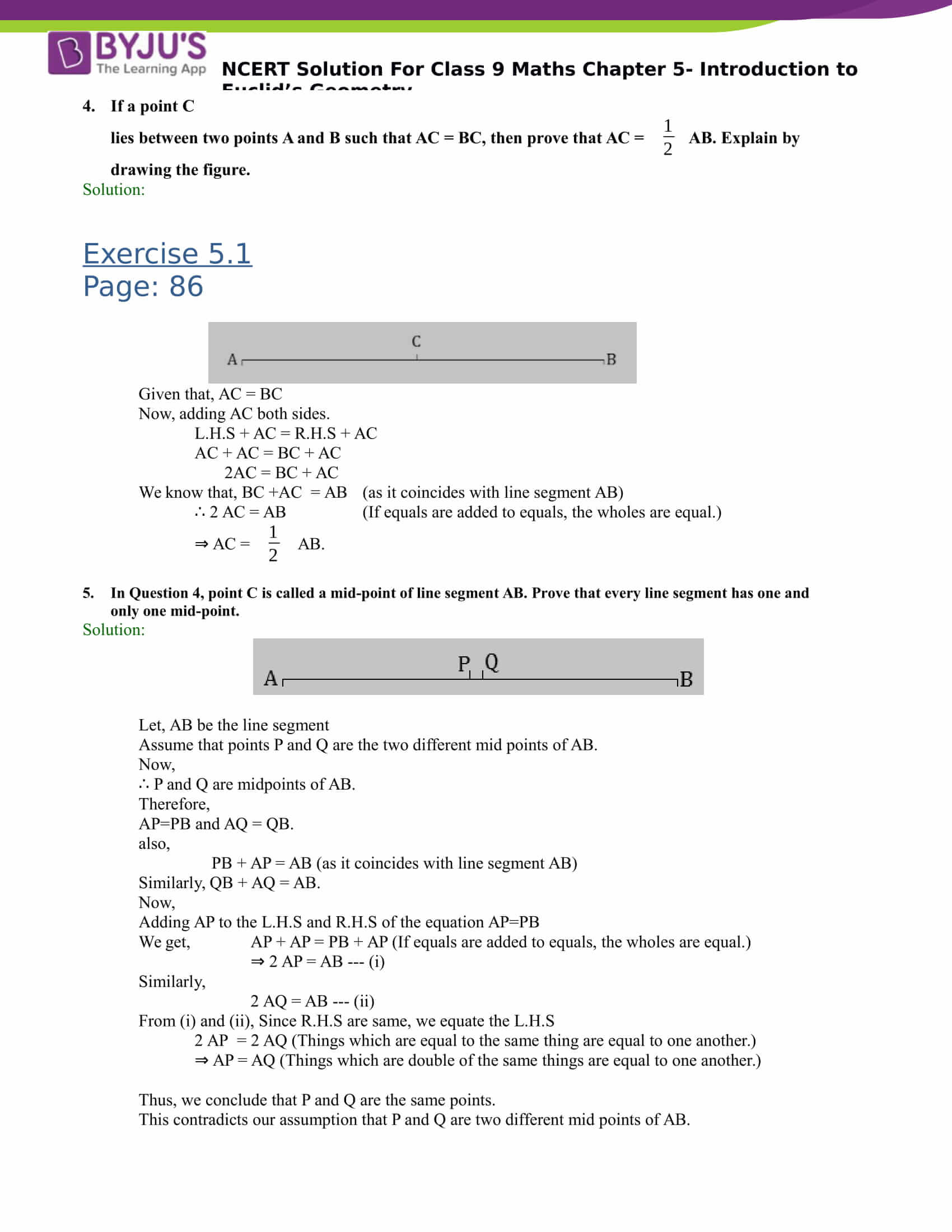 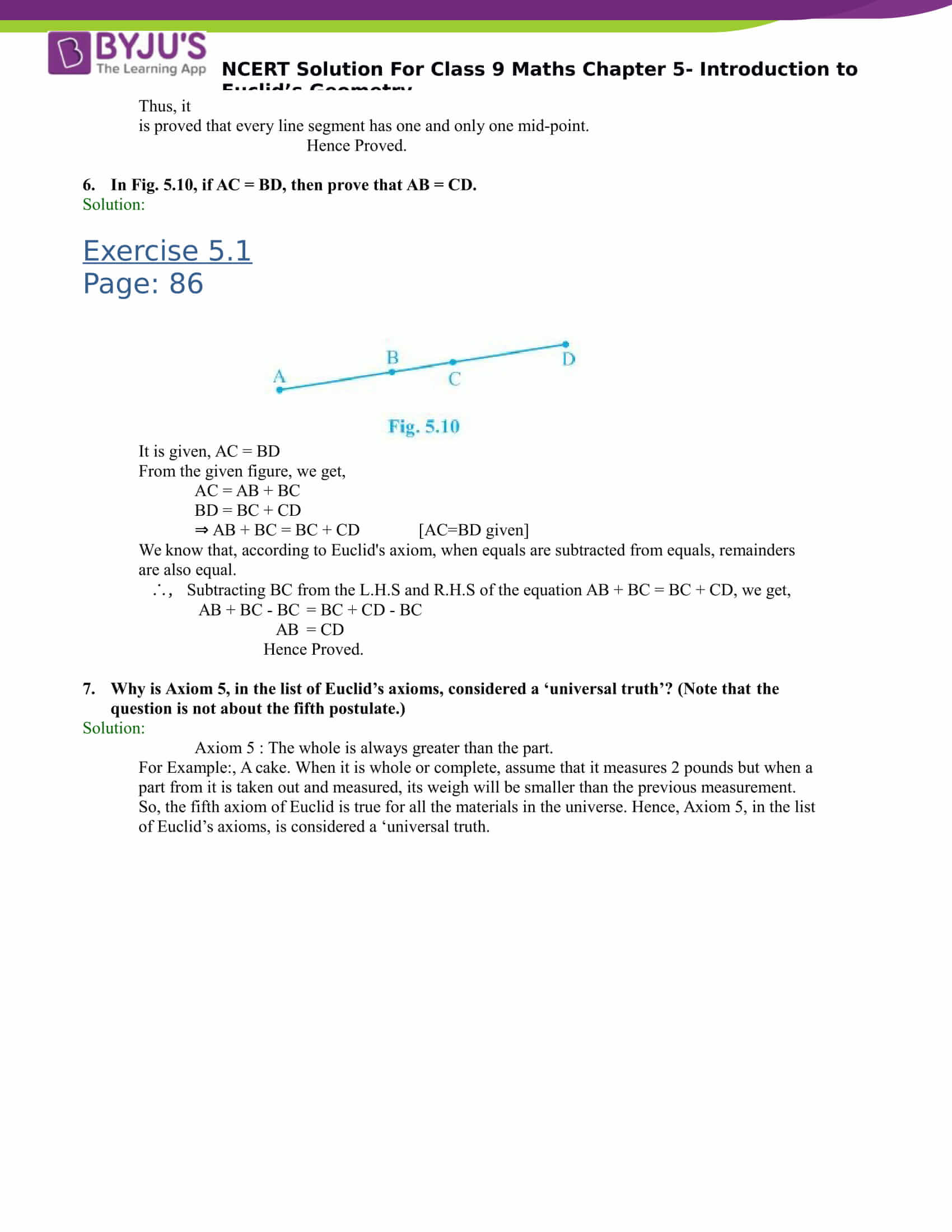 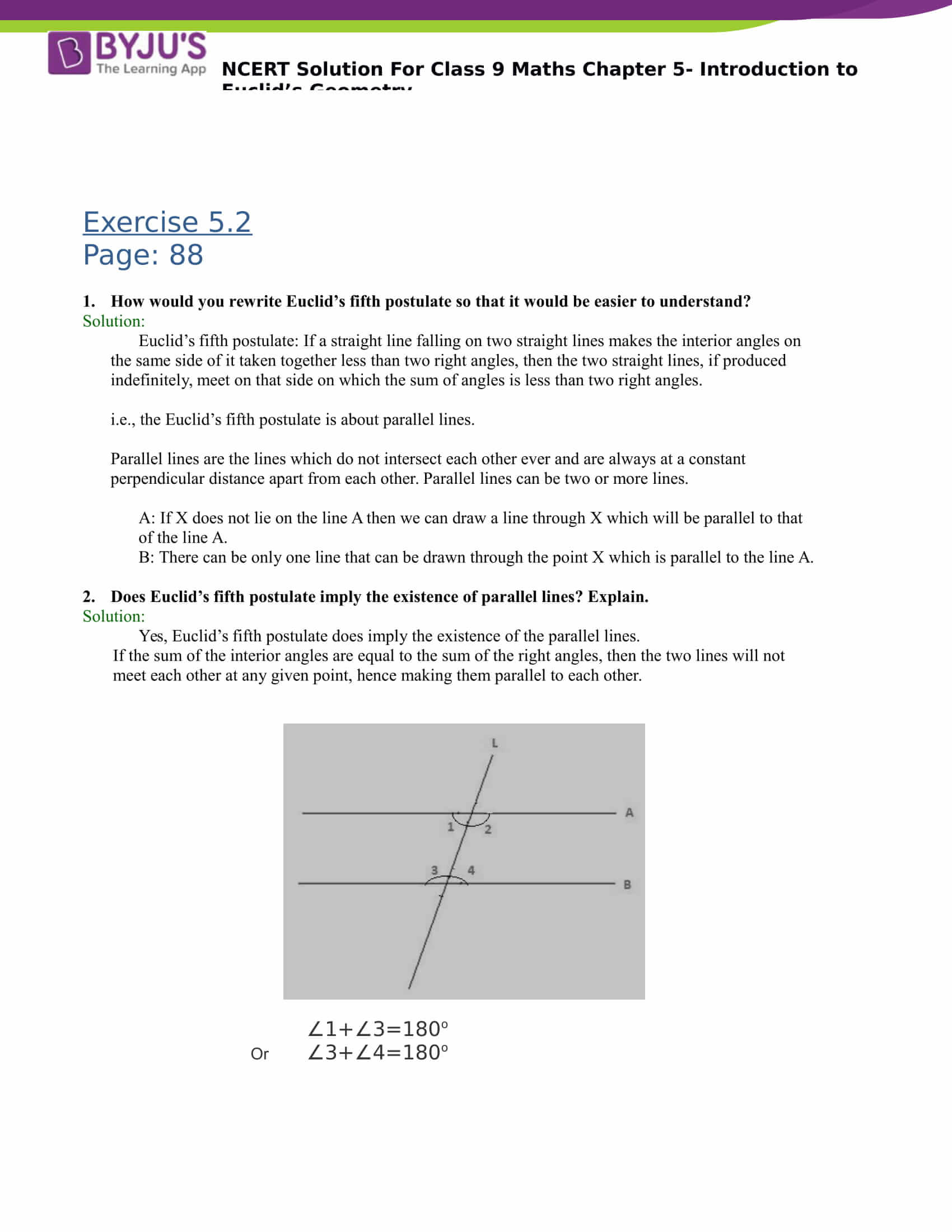 1. Which of the following statements are true and which are false? Give reasons for your answers.

There can be infinite number of lines that can be drawn through a single point. Hence, the statement mentioned is False

Through two distinct points there can be only one line that can be drawn. Hence, the statement mentioned is False

A line that is terminated can be indefinitely produced on both sides as a line can be extended on both its sides infinitely. Hence, the statement mentioned is True.

According to Euclid’s 1st axiom- “Things which are equal to the same thing are also equal to one another”. Hence, the statement mentioned is True.

2. Give a definition for each of the following terms. Are there other terms that need to be defined first? What are they, and how might you define them?

Yes there are other terms which need to be defined first, they are:

Plane: Flat surfaces in which geometric figures can be drawn are known are plane. A plane surface is a surface which lies evenly with the straight lines on itself.

Point: A dimensionless dot which is drawn on a plane surface is known as point. A point is that which has no part.

Line: A collection of points that has only length and no breadth is known as a line. And it can be extended on both directions. A line is breadth-less length.

3. Consider two ‘postulates’ given below:

Yes, these postulates are consistent when we deal with these two situation:

4. If a point C lies between two points A and B such that AC = BC, then prove that AC =1/2 AB. Explain by drawing the figure.

BC +AC  = AB (as it coincides with line segment AB, from figure)

5. In Question 4, point C is called a mid-point of line segment AB. Prove that every line segment has one and only one mid-point.

Let, AB be the line segment

Assume that points P and Q are the two different mid points of AB.

∴ P and Q are midpoints of AB.

PB + AP = AB (as it coincides with line segment AB)

Adding AP to the L.H.S and R.H.S of the equation AP=PB

⇒ AP = AQ (Things which are double of the same things are equal to one another.)

Thus, we conclude that P and Q are the same points.

This contradicts our assumption that P and Q are two different mid points of AB.

Thus, it is proved that every line segment has one and only one mid-point.

From the given figure, we get,

We know that, according to Euclid’s axiom, when equals are subtracted from equals, remainders are also equal.

7. Why is Axiom 5, in the list of Euclid’s axioms, considered a ‘universal truth’? (Note that the question is not about the fifth postulate.)

Axiom 5 : The whole is always greater than the part.

For Example:, A cake. When it is whole or complete, assume that it measures 2 pounds but when a part from it is taken out and measured, its weigh will be smaller than the previous measurement. So, the fifth axiom of Euclid is true for all the materials in the universe. Hence, Axiom 5, in the list of Euclid’s axioms, is considered a ‘universal truth.

1. How would you rewrite Euclid’s fifth postulate so that it would be easier to understand?

i.e., the Euclid’s fifth postulate is about parallel lines.

Parallel lines are the lines which do not intersect each other ever and are always at a constant perpendicular distance apart from each other. Parallel lines can be two or more lines.

A: If X does not lie on the line A then we can draw a line through X which will be parallel to that of the line A.

B: There can be only one line that can be drawn through the point X which is parallel to the line A.

Yes, Euclid’s fifth postulate does imply the existence of the parallel lines. 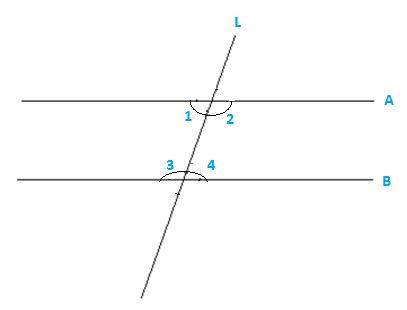 carries 28 marks out of 100. Therefore, it is quite important to ensure that this chapter is studied thoroughly.

The important topics that are covered under this chapter are:

Euclidean Geometry is a system introduced by the Alexandrian-Greek Mathematician Euclid around 300 BC. More than 2,000 years later, the contributions of Euclid still remain valid. It has practical applications in several fields, ranging from engineering to theoretical physics. It even has academic significance and implications in various disciplines of mathematics and science.