NCERT Solutions for Class 9 Science Chapter 8 Motion is designed with the intention of clarifying the doubts and concepts easily. Class 9 solution in science is a beneficial reference and guiding solution that help students clear doubts instantly in an effective way. 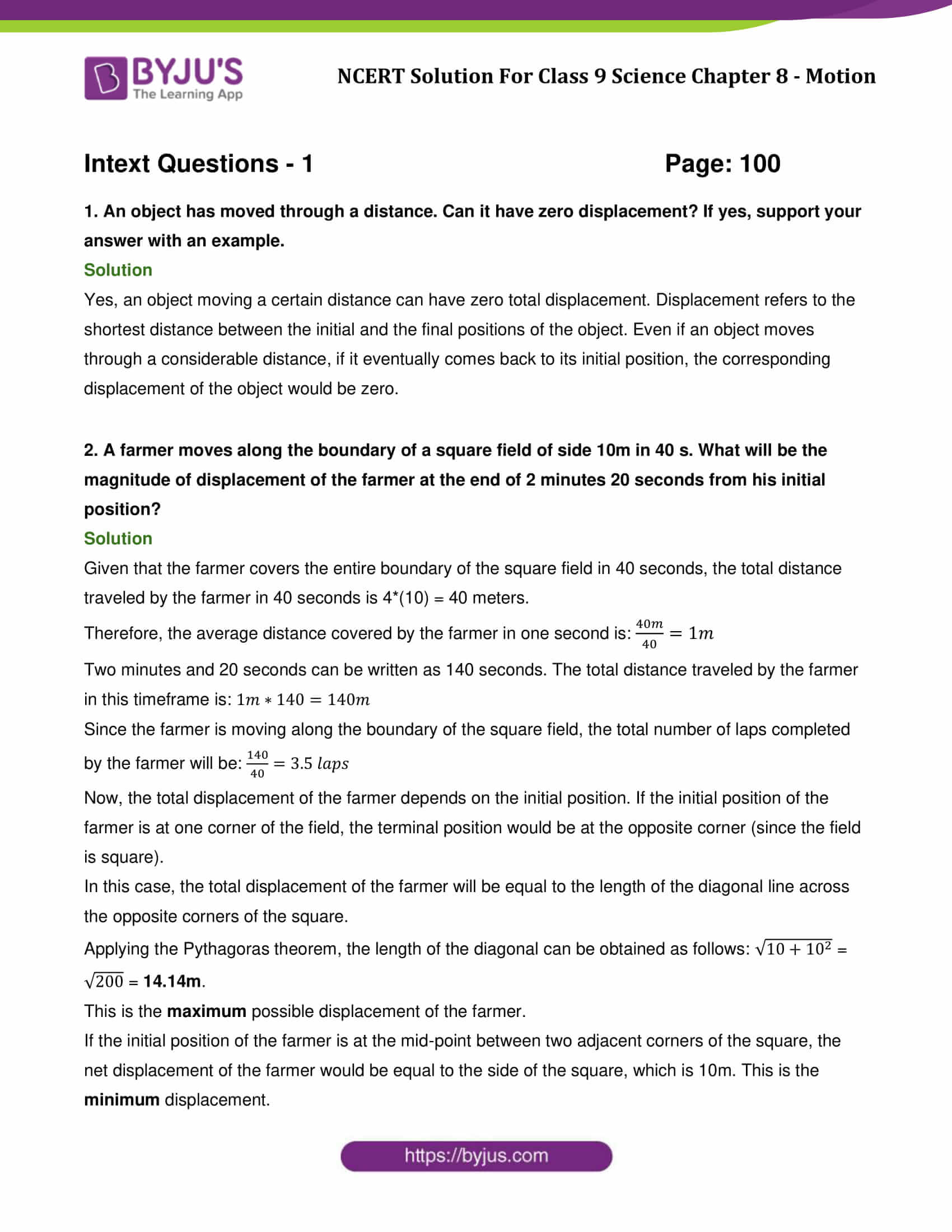 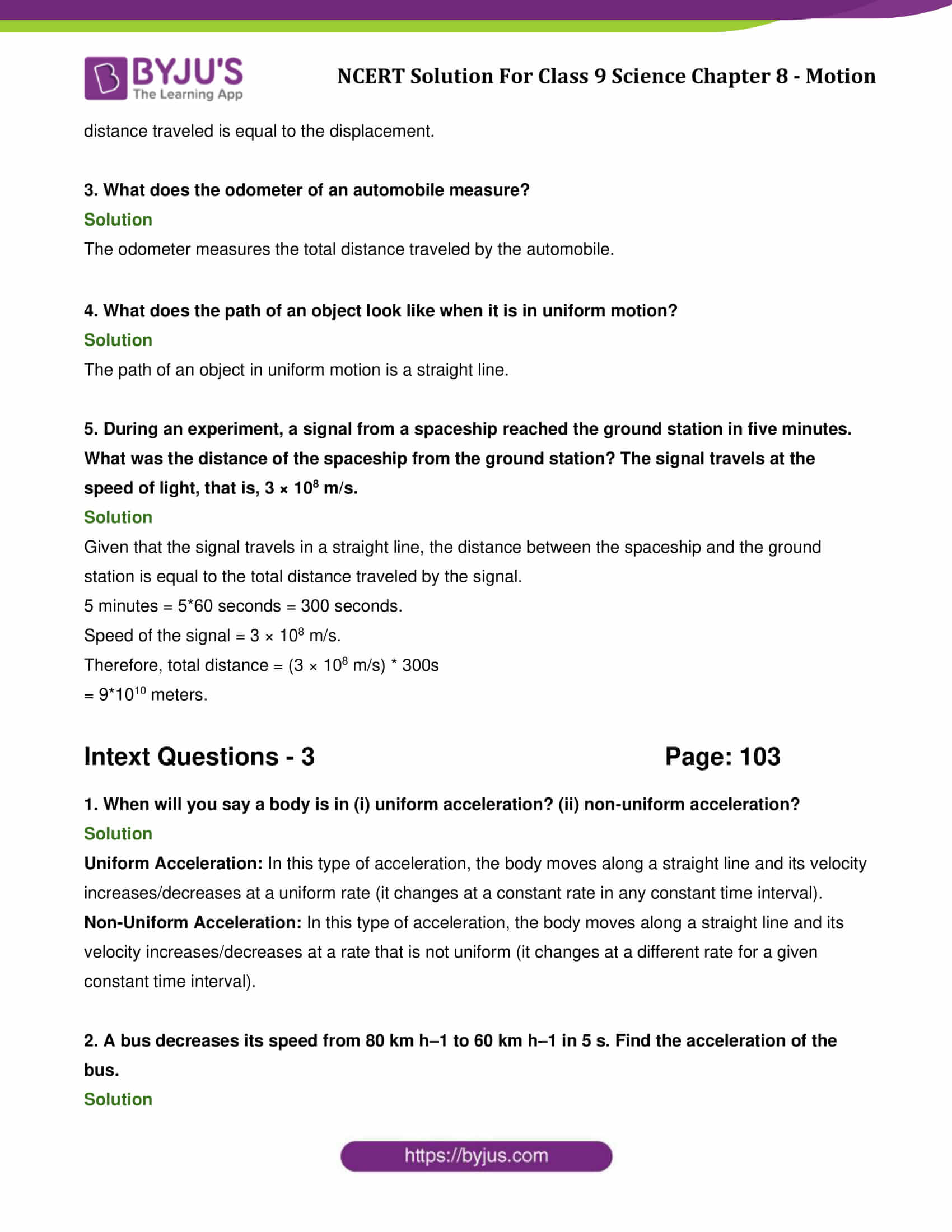 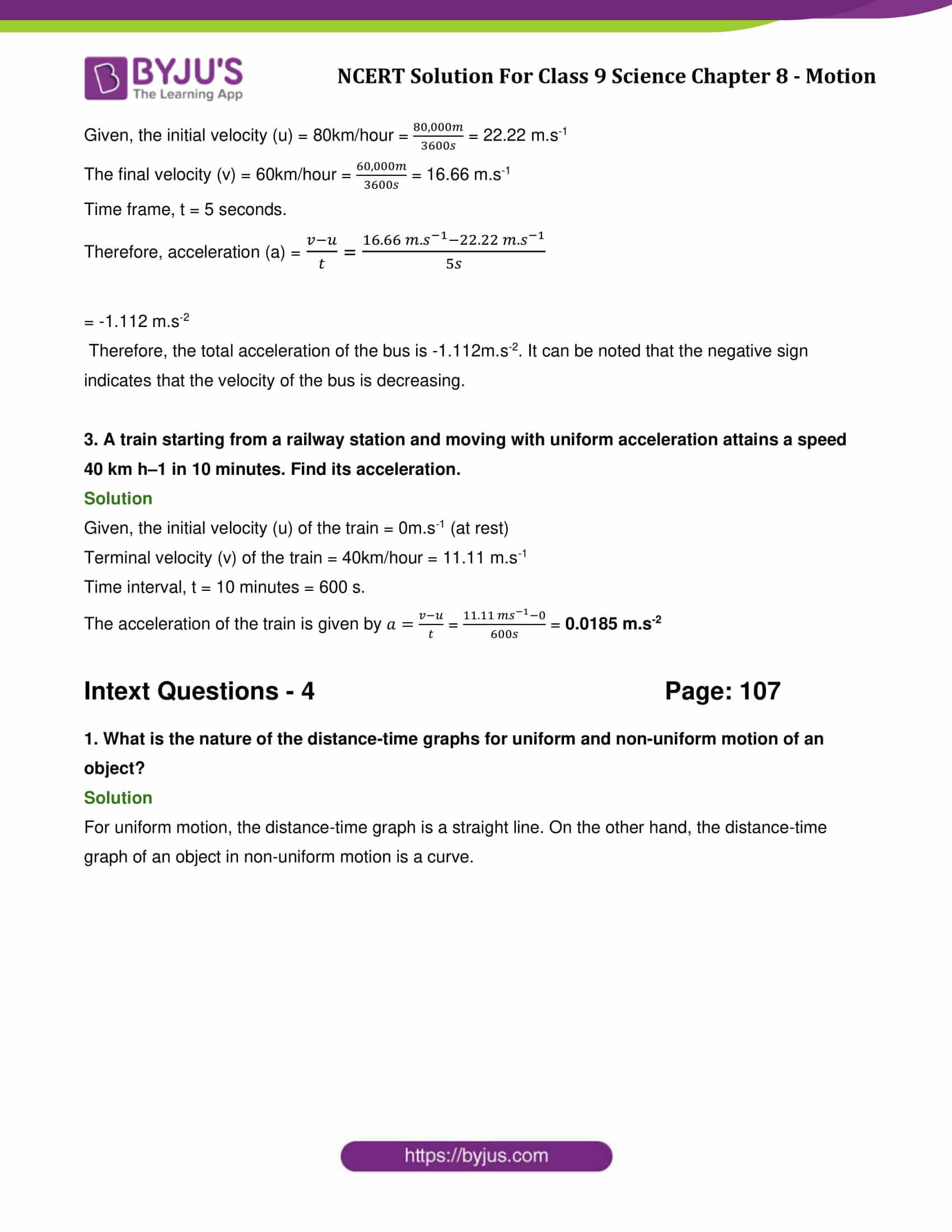 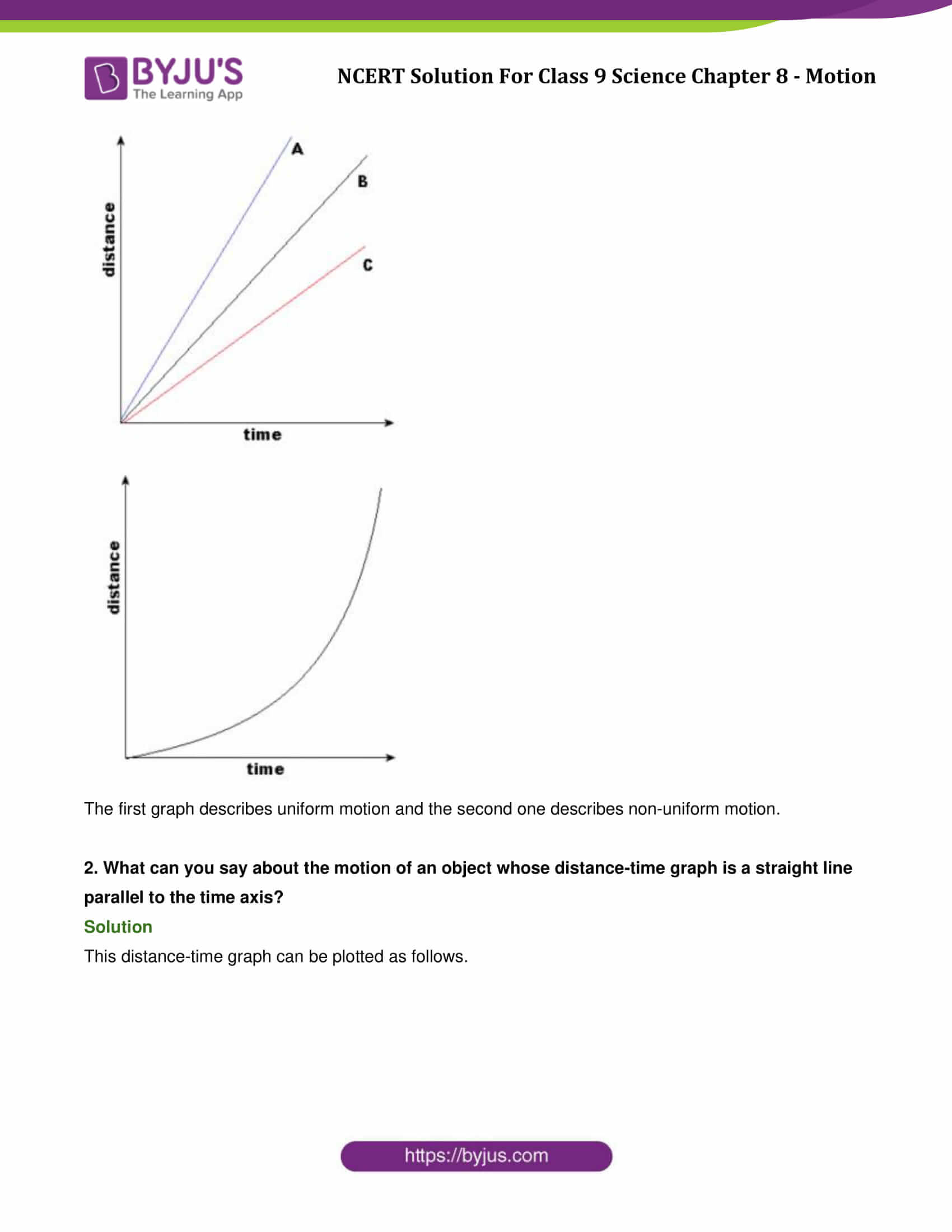 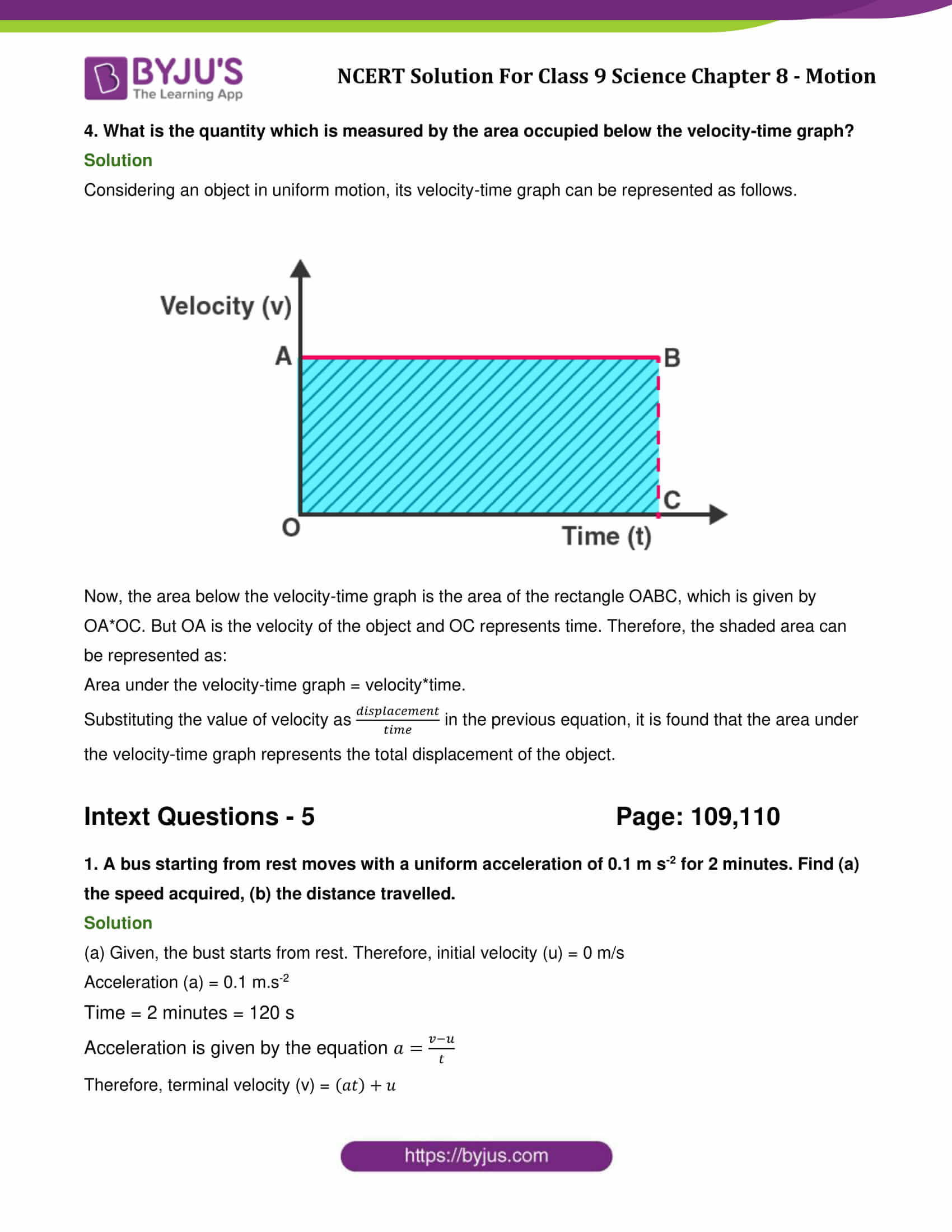 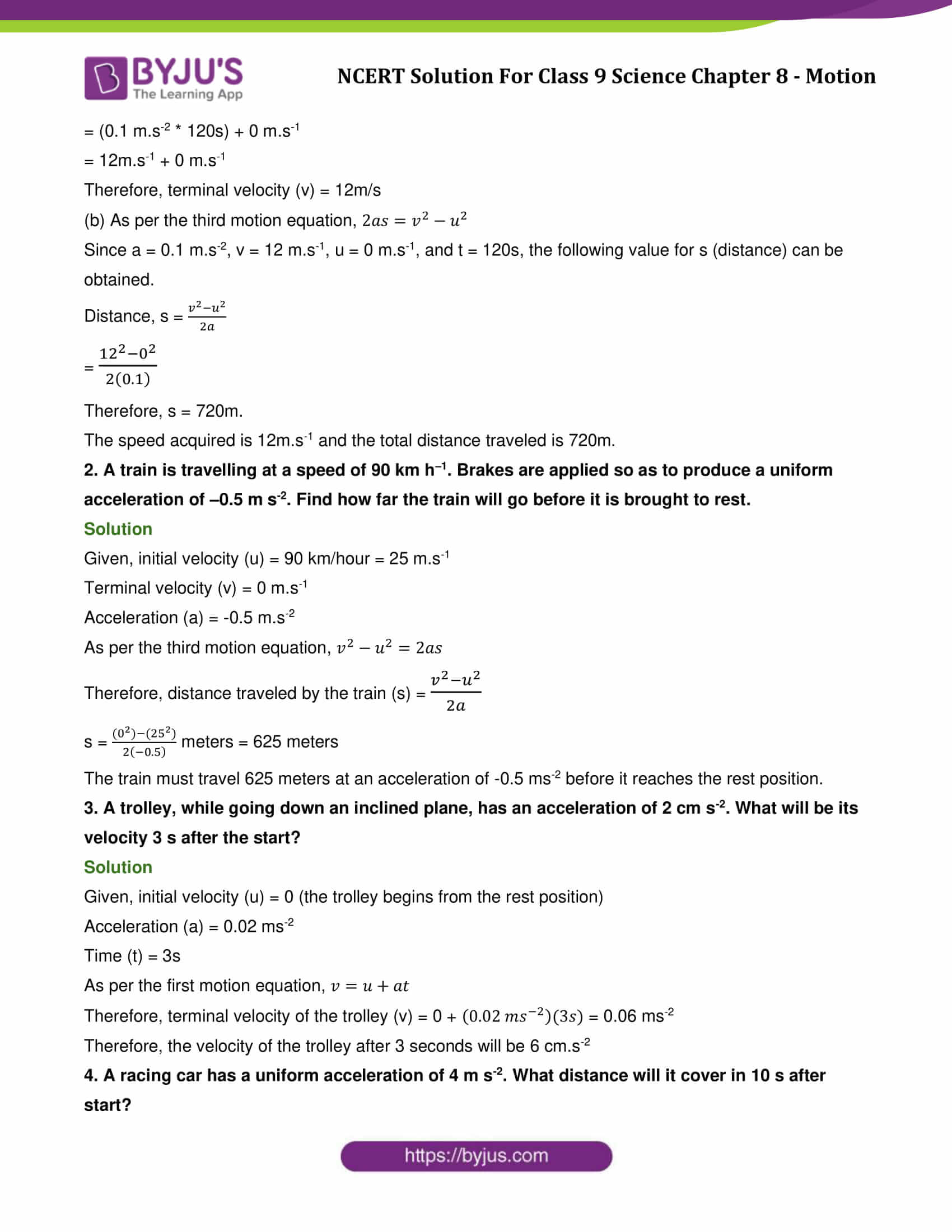 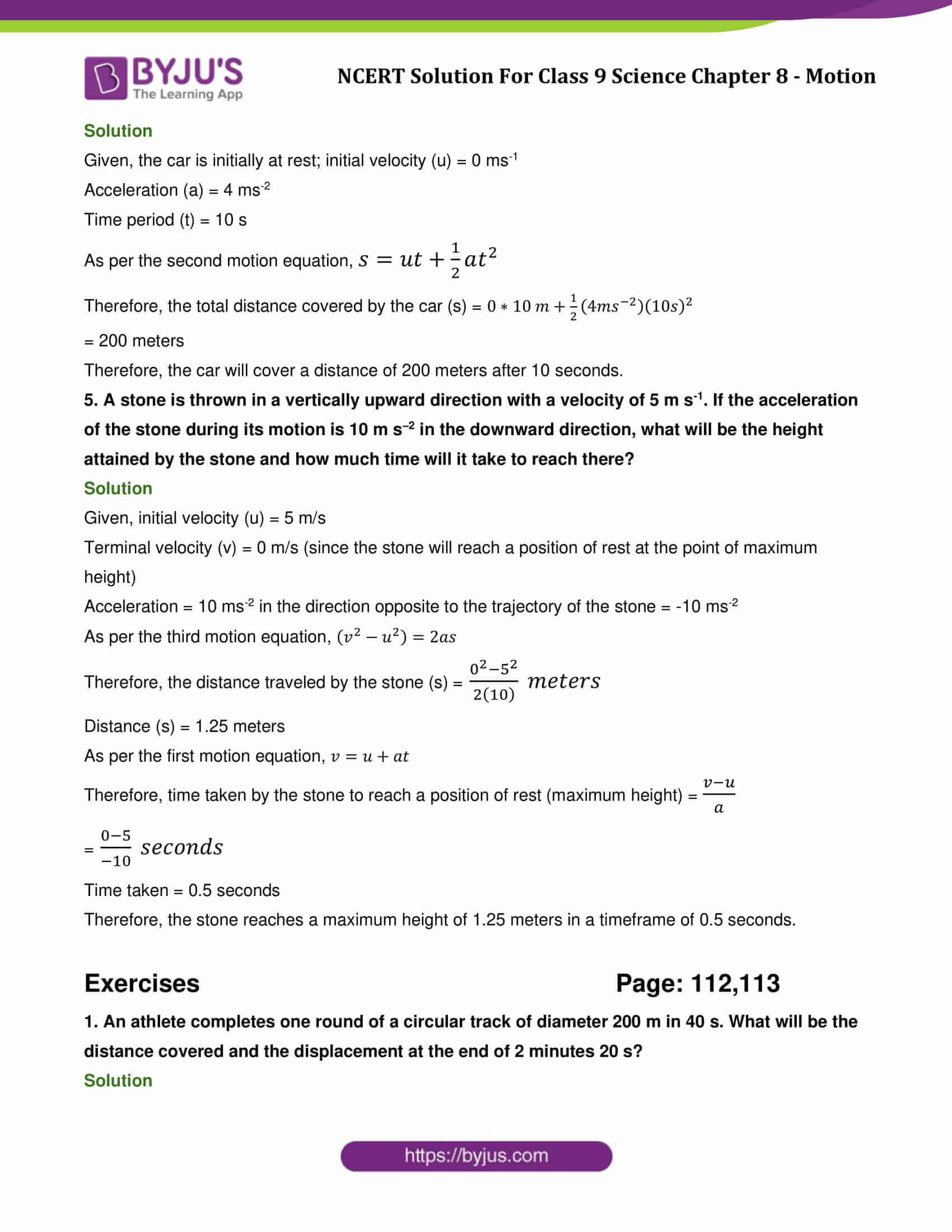 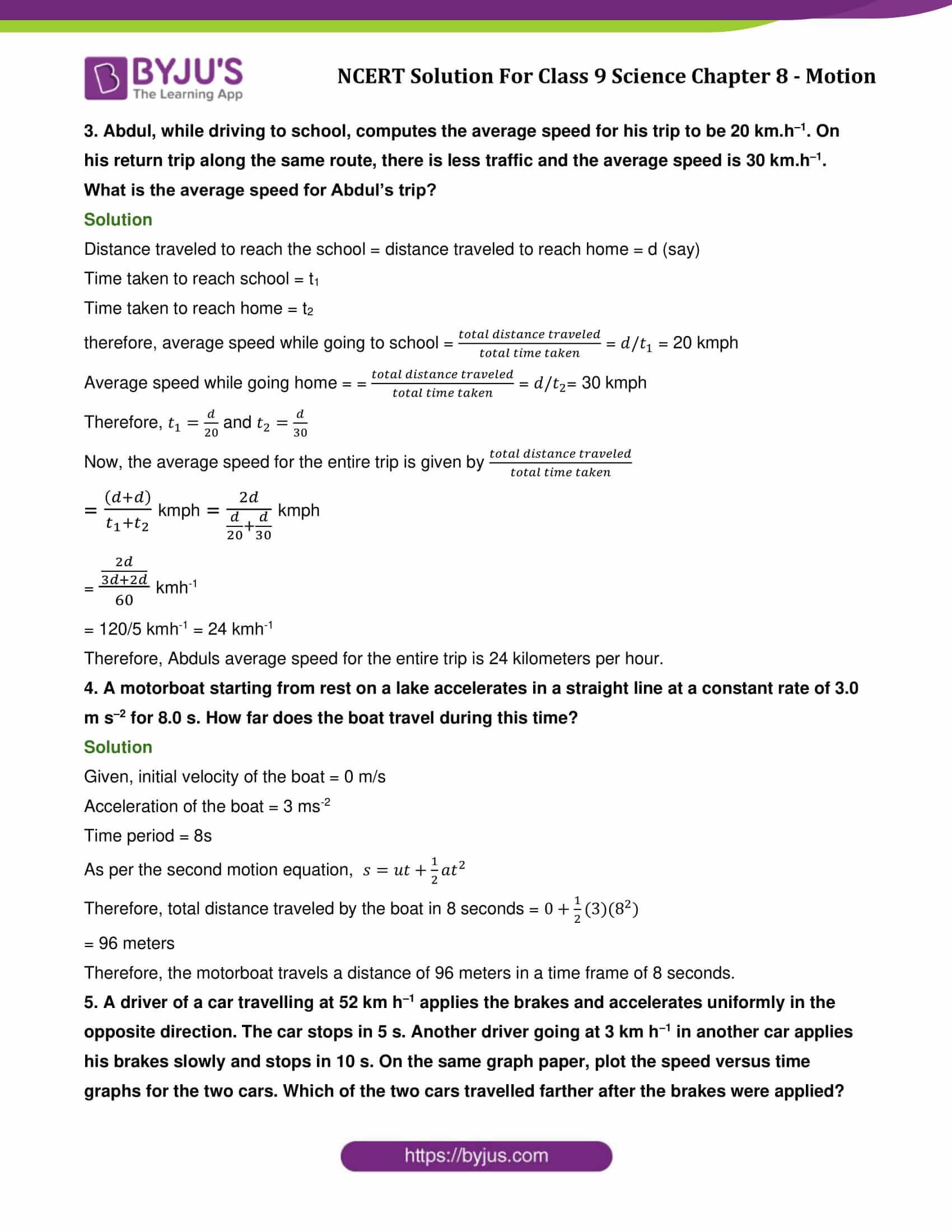 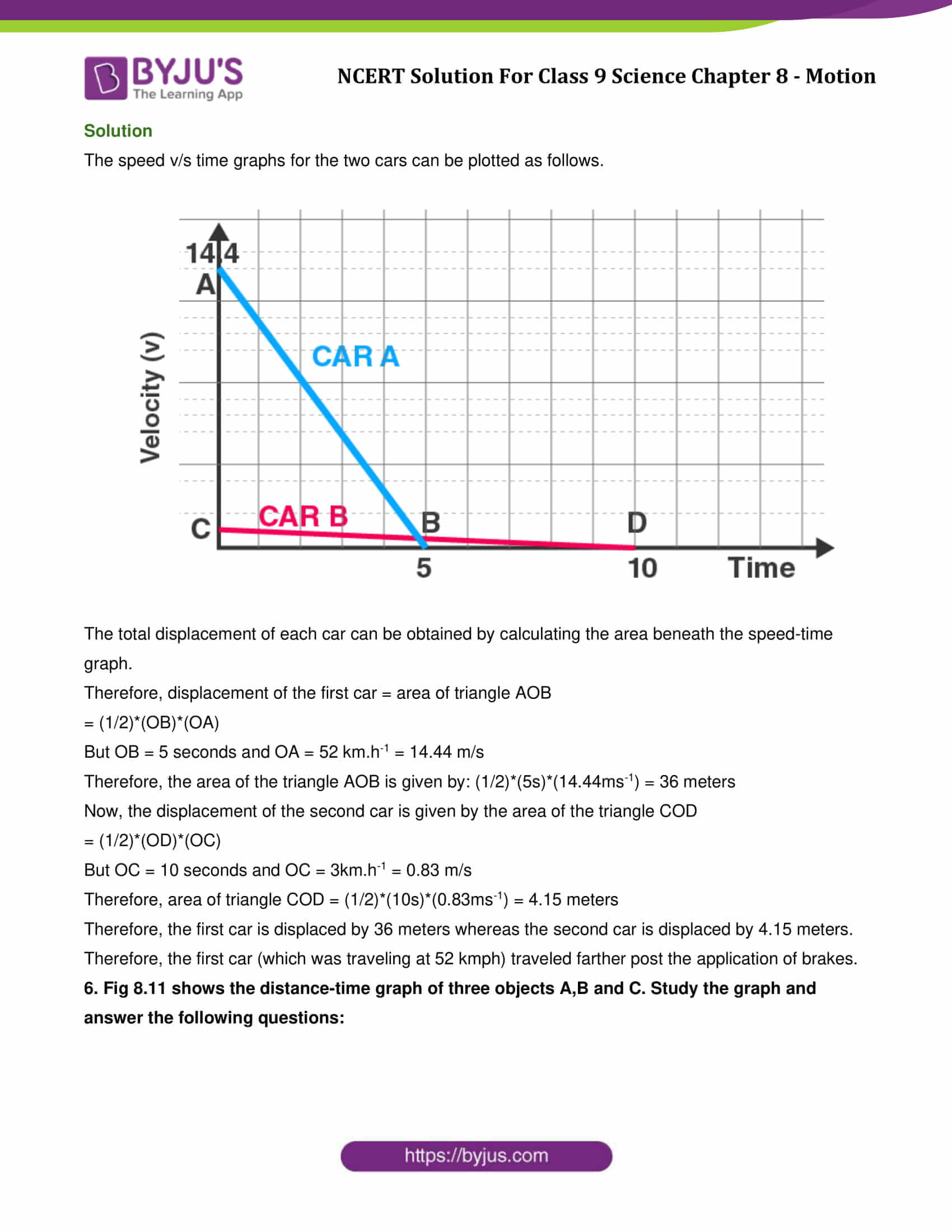 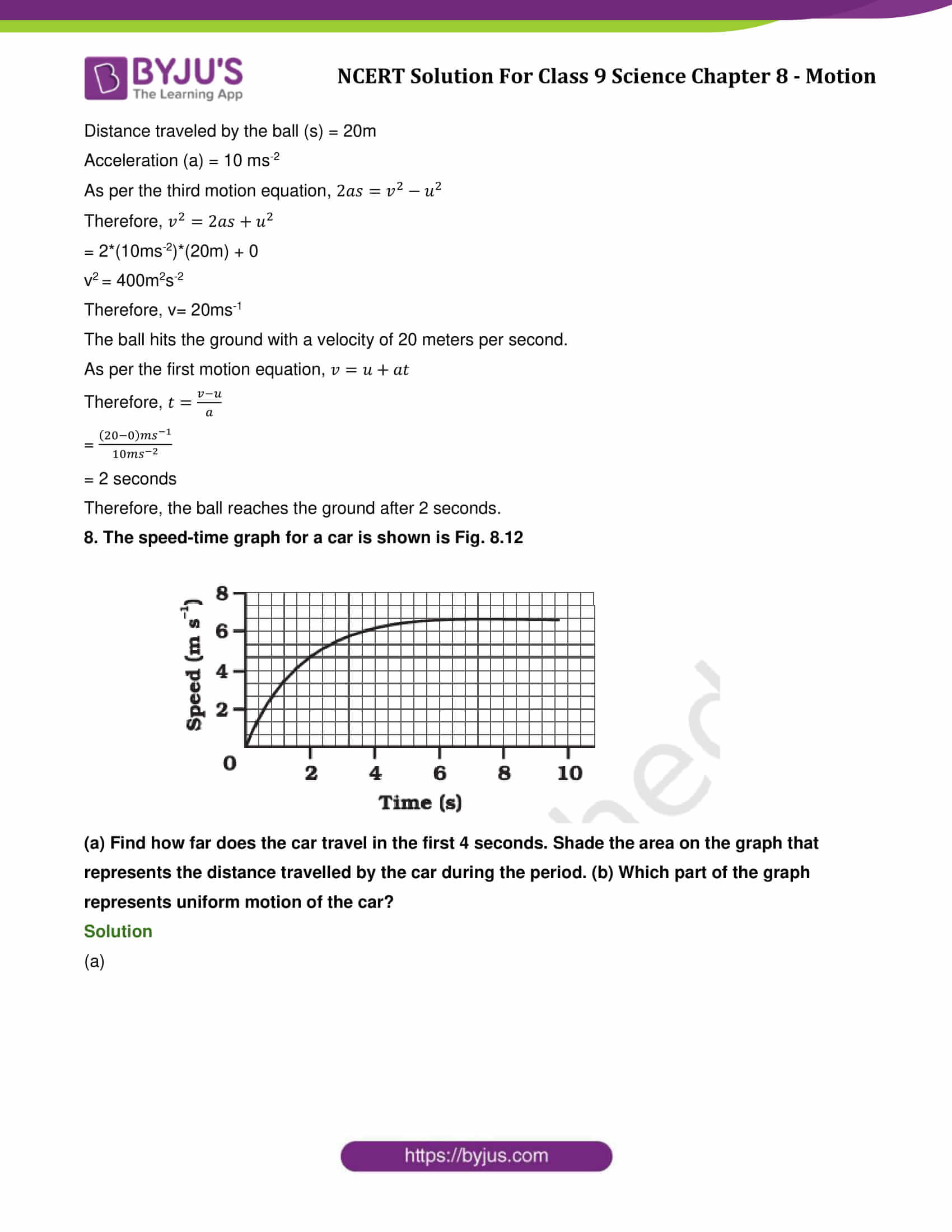 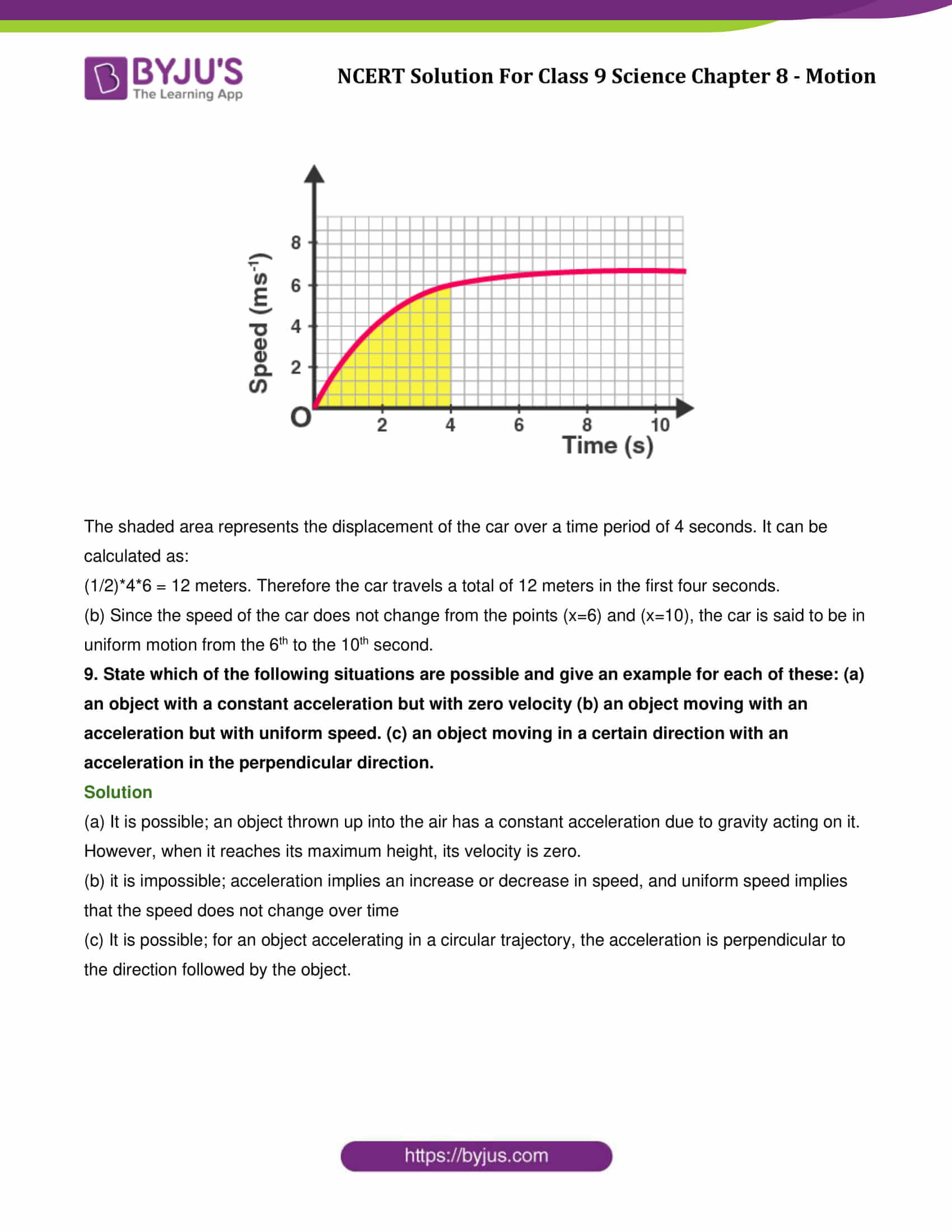 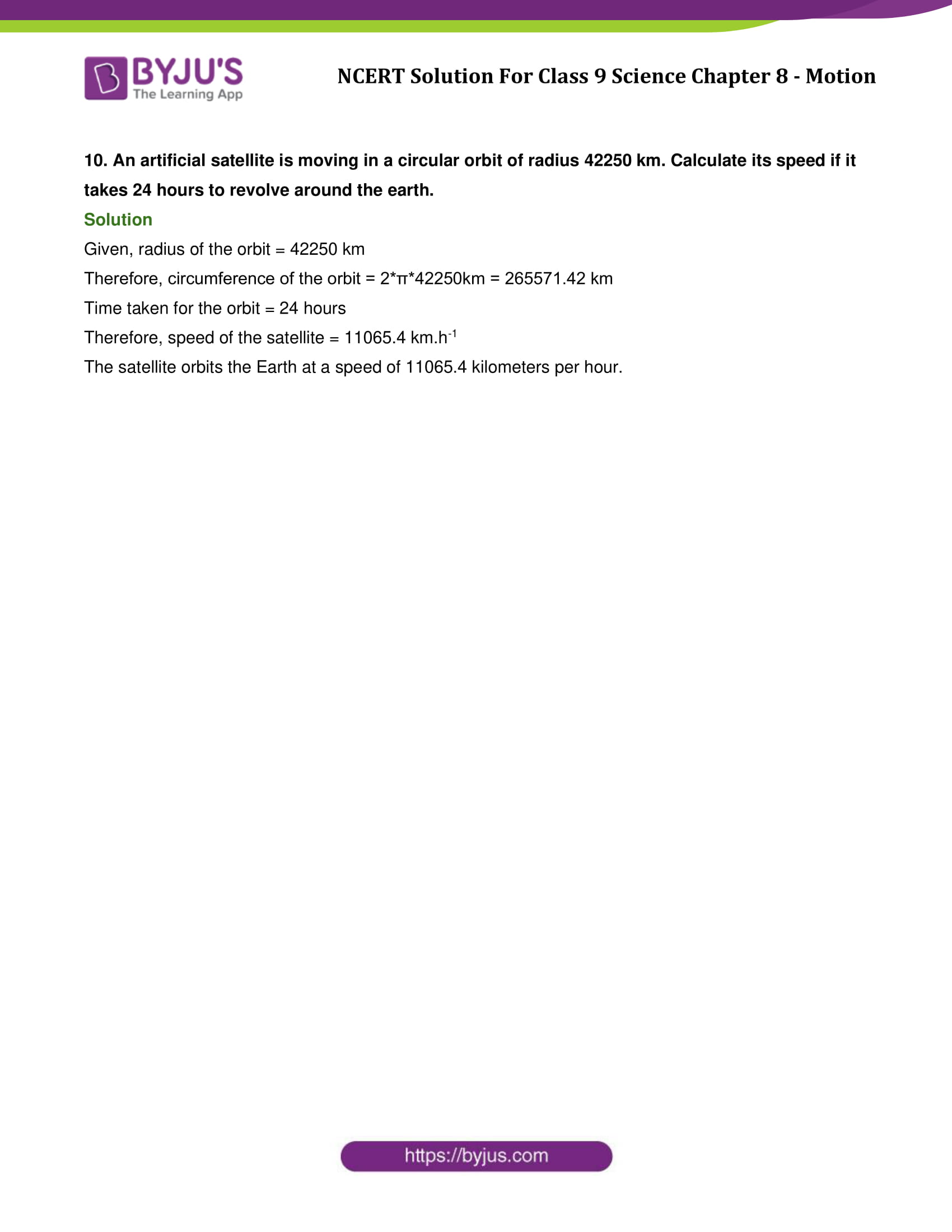 1. An object has moved through a distance. Can it have zero displacement? If yes, support your answer with an example.

2. A farmer moves along the boundary of a square field of side 10m in 40 s. What will be the magnitude of displacement of the farmer at the end of 2 minutes 20 seconds from his initial position?

Therefore, the average distance covered by the farmer in one second is:

Two minutes and 20 seconds can be written as 140 seconds. The total distance traveled by the farmer in this timeframe is:

Since the farmer is moving along the boundary of the square field, the total number of laps completed by the farmer will be:

In this case, the total displacement of the farmer will be equal to the length of the diagonal line across the opposite corners of the square.

Applying the Pythagoras theorem, the length of the diagonal can be obtained as follows: = = 14.14m.

This is the maximum possible displacement of the farmer.

If the farmer starts at a random point around the perimeter of the square, his net displacement after traveling 140m will lie between 10m and 14.14m.

3. Which of the following is true for displacement? (a) It cannot be zero. (b) Its magnitude is greater than the distance travelled by the object.

1. Distinguish between speed and velocity.

2. Under what condition(s) is the magnitude of average velocity of an object equal to its average speed?

3. What does the odometer of an automobile measure?

The odometer measures the total distance traveled by the automobile.

4. What does the path of an object look like when it is in uniform motion?

The path of an object in uniform motion is a straight line.

Given that the signal travels in a straight line, the distance between the spaceship and the ground station is equal to the total distance traveled by the signal.

Uniform Acceleration: In this type of acceleration, the body moves along a straight line and its velocity increases/decreases at a uniform rate (it changes at a constant rate in any constant time interval).

Non-Uniform Acceleration: In this type of acceleration, the body moves along a straight line and its velocity increases/decreases at a rate that is not uniform (it changes at a different rate for a given constant time interval).

Therefore, the total acceleration of the bus is -1.112m.s-2. It can be noted that the negative sign indicates that the velocity of the bus is decreasing.

3. A train starting from a railway station and moving with uniform acceleration attains a speed 40 km h–1 in 10 minutes. Find its acceleration.

1. What is the nature of the distance-time graphs for uniform and non-uniform motion of an object? 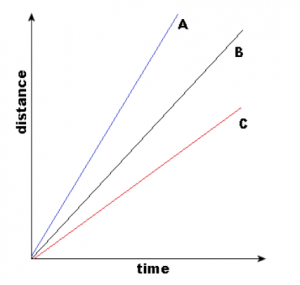 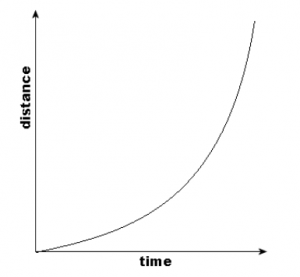 2. What can you say about the motion of an object whose distance-time graph is a straight line parallel to the time axis?

This distance-time graph can be plotted as follows.

Since there is no change in the distance traveled by the object (or the Y-Axis value) at any point in the X-Axis (time), the object is at rest.

3. What can you say about the motion of an object if its speed-time graph is a straight line parallel to the time axis?

This speed-time graph can be plotted as follows.

Since there is no change in the velocity of the object (Y-Axis value) at any point of time (X-axis value), the object is said to be in uniform motion.

4. What is the quantity which is measured by the area occupied below the velocity-time graph?

Considering an object in uniform motion, its velocity-time graph can be represented as follows.

Now, the area below the velocity-time graph is the area of the rectangle OABC, which is given by OA*OC. But OA is the velocity of the object and OC represents time. Therefore, the shaded area can be represented as:

Area under the velocity-time graph = velocity*time.

Substituting the value of velocity as in the previous equation, it is found that the area under the velocity-time graph represents the total displacement of the object.

1. A bus starting from rest moves with a uniform acceleration of 0.1 m s-2 for 2 minutes. Find (a) the speed acquired, (b) the distance travelled.

(a) Given, the bust starts from rest. Therefore, initial velocity (u) = 0 m/s

Acceleration is given by the equation

(b) As per the third motion equation,

The speed acquired is 12m.s-1 and the total distance traveled is 720m.

2. A train is travelling at a speed of 90 km h–1. Brakes are applied so as to produce a uniform acceleration of –0.5 m s-2. Find how far the train will go before it is brought to rest.

The train must travel 625 meters at an acceleration of -0.5 ms-2 before it reaches the rest position.

3. A trolley, while going down an inclined plane, has an acceleration of 2 cm s-2. What will be its velocity 3 s after the start?

Given, initial velocity (u) = 0 (the trolley begins from the rest position)

Therefore, the velocity of the trolley after 3 seconds will be 6 cm.s-2

4. A racing car has a uniform acceleration of 4 m s-2. What distance will it cover in 10 s after start?

As per the second motion equation,

Therefore, the total distance covered by the car (s) =

Therefore, the car will cover a distance of 200 meters after 10 seconds.

5. A stone is thrown in a vertically upward direction with a velocity of 5 m s-1. If the acceleration of the stone during its motion is 10 m s–2 in the downward direction, what will be the height attained by the stone and how much time will it take to reach there?

Therefore, the distance traveled by the stone (s) =

Therefore, time taken by the stone to reach a position of rest (maximum height) =

Therefore, the stone reaches a maximum height of 1.25 meters in a timeframe of 0.5 seconds.

1. An athlete completes one round of a circular track of diameter 200 m in 40 s. What will be the distance covered and the displacement at the end of 2 minutes 20 s?

Therefore, the final position of the athlete (with respect to the initial position) is at the opposite end of the circular track. Therefore, the net displacement will be equal to the diameter of the track, which is 200m.

2. Joseph jogs from one end A to the other end B of a straight 300 m road in 2 minutes 30 seconds and then turns around and jogs 100 m back to point C in another 1 minute. What are Joseph’s average speeds and velocities in jogging (a) from A to B and (b) from A to C?

Given, distance covered from point A to point B = 300 meters

Displacement from A to B = 300 meters

Therefore, the average speed while traveling from A to B = = 2 m/s

Average velocity while traveling from A to B = = 2 m/s

Now, the average speed for the entire trip is given by

Therefore, Abduls average speed for the entire trip is 24 kilometers per hour.

4. A motorboat starting from rest on a lake accelerates in a straight line at a constant rate of 3.0 m s–2 for 8.0 s. How far does the boat travel during this time?

Given, initial velocity of the boat = 0 m/s

As per the second motion equation,

Therefore, total distance traveled by the boat in 8 seconds =

Therefore, the motorboat travels a distance of 96 meters in a time frame of 8 seconds.

5. A driver of a car travelling at 52 km h–1 applies the brakes and accelerates uniformly in the opposite direction. The car stops in 5 s. Another driver going at 3 km h–1 in another car applies his brakes slowly and stops in 10 s. On the same graph paper, plot the speed versus time graphs for the two cars. Which of the two cars travelled farther after the brakes were applied?

The speed v/s time graphs for the two cars can be plotted as follows. 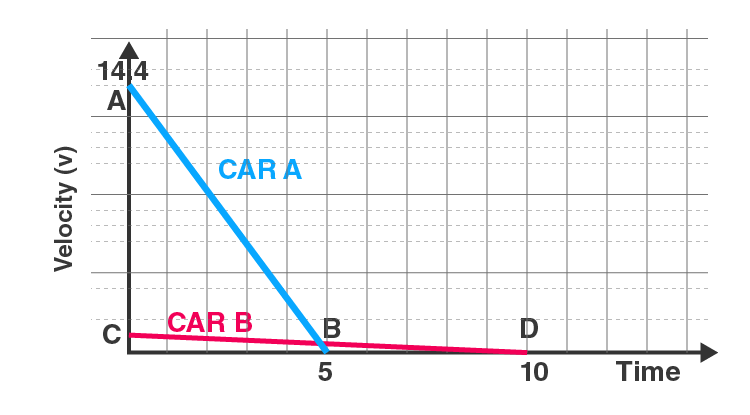 The total displacement of each car can be obtained by calculating the area beneath the speed-time graph.

Therefore, displacement of the first car = area of triangle AOB

Now, the displacement of the second car is given by the area of the triangle COD

6. Fig 8.11 shows the distance-time graph of three objects A,B and C. Study the graph and answer the following questions: 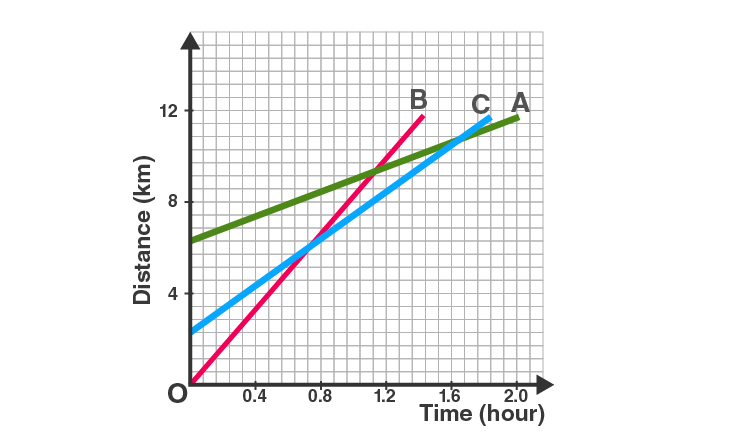 (a) Which of the three is travelling the fastest? (b) Are all three ever at the same point on the road? (c) How far has C travelled when B passes A? (d) How far has B travelled by the time it passes C?

(a) since the slope of line B is the greatest, B is traveling at the fastest speed.

(b) since the three lines do not intersect at a single point, the three objects never meet at the same point on the road.

When A passes B, the distance between the origin and C is 8km

(d) the distance that object B has covered at the point where it passes C is equal to 9 graph units.

Given, initial velocity of the ball (u) = 0 (since it began at the rest position)

The ball hits the ground with a velocity of 20 meters per second.

Therefore, the ball reaches the ground after 2 seconds.

(a) Find how far does the car travel in the first 4 seconds. Shade the area on the graph that represents the distance travelled by the car during the period. (b) Which part of the graph represents uniform motion of the car?

The shaded area represents the displacement of the car over a time period of 4 seconds. It can be calculated as:

(a) It is possible; an object thrown up into the air has a constant acceleration due to gravity acting on it. However, when it reaches its maximum height, its velocity is zero.

(b) it is impossible; acceleration implies an increase or decrease in speed, and uniform speed implies that the speed does not change over time

(c) It is possible; for an object accelerating in a circular trajectory, the acceleration is perpendicular to the direction followed by the object.

10. An artificial satellite is moving in a circular orbit of radius 42250 km. Calculate its speed if it takes 24 hours to revolve around the earth.

Time taken for the orbit = 24 hours

The satellite orbits the Earth at a speed of 11065.4 kilometers per hour.

NCERT Class 9 Science Chapter 8 explains the concept of motion, types of motion with relevant day today examples for the clear understanding of the concept. It does explain the cause of the happenings of sunrise, sunset, and changing of the seasons. It makes students understand the uniform and non-uniform motion. Distance-time graph and velocity-time graph which is considered as the important concepts for examination are explained in an easy way in NCERT Solutions. It describes how the acceleration of an object is the change in velocity per unit time. NCERT Class 9 Science Chapter 8 is covered under Unit III: Motion, Force and Work and can get you maximum marks.

An object has moved through a distance. Can it have zero displacement? If yes, support your answer with an example.

Under what condition(s) is the magnitude of the average velocity of an object equal to its average speed?

What does the odometer of an automobile measure?

The odometer measures the total distance travelled by automobile.

What does the path of an object look like when it is in uniform motion?

The path of an object in uniform motion is a straight line.